A Shared Path to Success

Dan Amoruso and Clark Judkins had very different goals when they enrolled in a master’s degree program in security studies at UMass Lowell. Through their highly interactive online classes, however, they were able to connect over commonalities, and forged a lasting and supportive friendship.

More From Our Students » 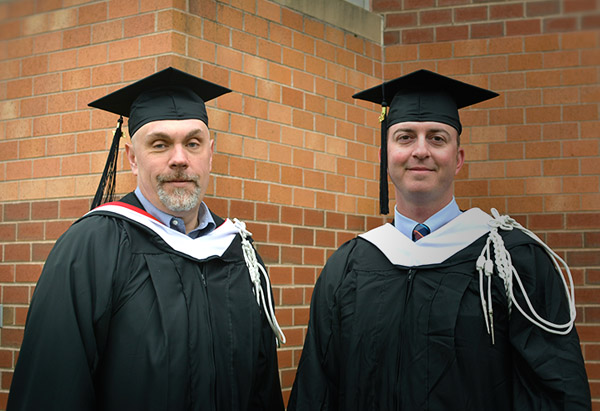 Dan Amoruso and Clark Judkins were coming from very different places when they each made the decision to enroll in UMass Lowell's Online Master of Arts in Security Studies: Homeland Defense Concentration program. Dan, a government instructor from Boise, Idaho, was looking for a high-quality graduate degree program that would prepare him for future academic endeavors, such as a doctoral degree. A local UMass Lowell student from Clinton, Massachusetts, Clark made the decision to enroll in the accelerated, five-year B.S./M.A. program while he was earning his bachelor's degree. Ultimately, though, both men were looking for the same thing at the same time: a flexible — and challenging — security studies master's degree program taught by industry experts at a reputable university. This is how their paths came to cross at UMass Lowell. And the similarities between them don't end there.

They have both spent time in the military — Dan is a U.S. Army veteran; Clark served in the U.S. Marine Corps. A shared appreciation for hard work and high standards, likely shaped by their military background, led to the development of a lasting friendship that started in an online class. "We both had the work ethic, and we went the extra mile in our weekly discussion posts," Clark explains. "We actually would feed off one another. The rapport between veterans in the online world is very apparent, and it helps you strive for your best — almost competitively."

Dan readily agrees. "There are certain people that make the learning experience that much more enjoyable, both personally and professionally," he says. "I connected with Clark and with other students who I could tell were also putting forth their best work and, at times, challenged (respectfully, of course) my perspective and outlook on various topics."

Both men also faced the challenge of balancing schoolwork with family obligations and other responsibilities. "I decided to pursue a graduate degree online because of my schedule," says Dan, who travels often for business. "I am out of town a lot, I work late, and I have a family so flexibility was key." Clark, too, had a lot of demands on his time. "I was not officially working in the traditional sense, but I was a stay-at-home dad for two young boys a few days a week," he explains. "When I was not doing that, I participated in internships at UMass Lowell's Center for Terrorism & Security Studies, which really helped put my education into perspective."

Dan and Clark each cite the expertise of Professor James Forest, Ph.D. as an important element of the positive educational experience they had at UMass Lowell. "I wanted to study with Dr. Forest based on his interests in political violence in Africa because that is also a significant interest of mine," Dan explains. "Also, based on his resume, I felt the program would be of a high caliber and that it would challenge me."

Clark credits the support he received from Dr. Forest as one of many factors that led to his decision to continue his education at UMass Lowell. "Dr. Forest had a major influence on me during the undergrad classes I took with him. My favorite class was the online Comparative Terrorism and Counterterrorism class because that topic interests me the most, and Dr. Forest provided excellent lectures and primary articles and other resources to explore."

Dan says his time at UMass Lowell enabled him to gain a wider perspective on global and national affairs, along with an understanding of the real-world application of the concepts and ideas that were presented in his classes. "All of the professors [at UMass Lowell] are experts and possess years of experience in what they teach. My intelligence class was taught by an intelligence officer, and the science and technology class was taught by a professor that used to work with a research and development company. So I was educated about the practical application of what I was learning."

Clark reports that his education at UMass Lowell has benefitted him in a variety of ways — some of which are specific and concrete, such as the experiences he had working at the Center for Terrorism & Security Studies (CTSS). "[My time at UMass Lowell] allowed me to make a difference. For example, I was asked to supervise and consult with two different teams of interns at the CTSS," he explains. "These teams participated in nationwide competitions geared towards developing programs that can be used to counter violent extremism." Other gains, however, were more personal. "I learned how to rise above previous failures with my education. I graduated from high school with a 1.6 GPA and dropped out of college twice after my stint in the Marines," says Clark. "At UMass Lowell, I was able to recognize my true potential, which allowed me to excel."

With their studies — and their paths — having overlapped at UMass Lowell, Dan and Clark now have very different plans for the future. But with their graduate degrees in hand, both of them are poised for success. "I am working toward becoming published," says Dan. "My degree has already helped with my career. I have started teaching as an adjunct, and I hope that will develop into a full-time career in the near future."

"My goal is to become an intelligence analyst within the United States intelligence community," reports Clark. "My degree has already afforded me opportunities to interview with the Defense Intelligence Agency, the Department of Justice, The Internal Revenue Service, the Defense Logistics Agency and as a civilian contactor for the United States Air Force. I have also re-enrolled at UMass Lowell. I'm seeking a master's degree in Criminal Justice this time around. This has allowed me to stay with the CTSS as an intern supervisor on three different projects."

Although he completed his degree entirely online, Dan says the connection he felt — to other students, to his professors, and to the University itself — was pivotal to his success. "What I liked most about my experience with UMass Lowell is that I was never made to feel like just an online student," he says. "I was always involved in current events via email, I was invited to attend graduation, and so on." Dan and Clark, who continue to stay in touch and support one another's career goals and aspirations, met face-to-face for the first time at commencement in May. 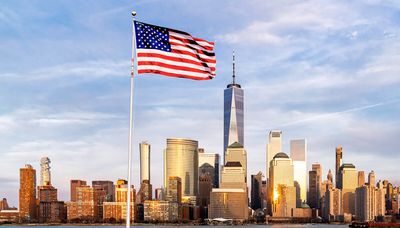 We'd love to hear from you. Fill out the form below.